“St. John’s is a school for the intellectual explorer …  if you’re game for an adventure that equips you to think and communicate about complex ideas with a collegial community of scholars, St. John’s might be your nirvana.“
– Colleges That Change Lives

St. John’s welcomes prospective students to connect with us on campus in Annapolis, Maryland, on campus in Santa Fe, New Mexico, or virtually.

⋅ 1018 students between two campuses
⋅ 7:1 student-to-faculty ratio
⋅ 25% identify as students of color
⋅ 20% are Pell recipients
⋅ 11% are first generation to college
⋅ Average class size is 16 with no class larger than 21
⋅ Approximately 90% students come from out of state.
⋅ Undergraduate students come from 49 states and 27 countries. 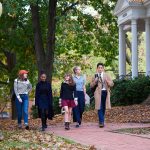 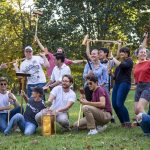 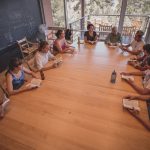 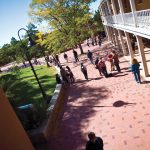 Character
Worth Noting
Faculty & Academics
Areas of Study
There is a singular interdisciplinary program at St. John’s College because the human mind is not segmented into majors. All students follow the same curriculum based on reading original texts — the great books— and examining them in small, discussion-based classes. The program is well-balanced between the humanities on the one hand and the sciences and math on the other. Significant areas of concentration emerge in the five categories of classes: seminar, math, science, music, and language.

What makes for a successful college graduate? According to most conventional measures, St. John’s alumni excel in their careers, from law to medicine, from academia to Wall Street, from politics to the military, from information technology to fashion design, from manufacture to farming, from nuclear physics to film making. Having all followed the same curriculum at the college, they fan out after graduation into virtually all fields, attending top graduate and professional schools, racking up achievements, pursuing their goals. 70% go to graduate school. St. John’s is in the top two percent of all colleges and universities in the nation for percent of alumni who go on to earn PhDs; in the top one percent for degrees in the humanities and the top four percent for those in science and engineering. Since 1990, St. John’s has graduated 13 Fulbright Scholars, 6 Rhodes Scholars, 6 Goldwater Scholars, and 5 Truman Scholars.

In addition to their graduate school and career success, St. John’s alumni talk about a college experience that was personally and professionally transformative:

“St. John’s prepared me to become a quick learner, to think on my feet, and, most importantly, to know when I didn’t know something. Every day, I rely on the foundation in philosophical inquiry that I found at St. John’s.” —Senior Manager of Strategic Planning and Research, American Honda Motor Company (class of 1980).

“There are days when having been to St. John’s almost seems like an unfair advantage compared to my colleagues. I mean, if I can figure out the Maxwell Equations, or muddle through the Principia Mathematica, how hard can it be to have the confidence that I can figure out some policy issue?” —Diplomat, US Department of State, Iraq (class of 1988)

“It’s extraordinary that ideas I encountered over 40 years ago at St. John’s are still so vital to my life and work. Perhaps that’s the promise of Great Books and a Great Books education: that its value to you will increase, rather than decrease, over time.” —Screenwriter and Director (class of 1964)

Career Services helps students apply for jobs, prepare for interviews, choose graduate programs, and get internships. Over half of students do internships in the summers, many of which are funded by the college.